There are thousands of Apps available from the Apps Store on iTunes. The beauty of it is that some of them are free, and some cost only a few dollars to buy. Here’s what’s on my iPhone:

Fieldrunners $4.99
Game On! Fieldrunners is highly addictive and it makes time go by a lot faster when I’m waiting in airports, etc. It’s a sort of strategy game where you build defense towers to stop the hoards from reaching the other side. The developer has made good use of the iPhone’s touch screen to control the game and it works really well. The beauty about this game is its simplicity. There’s no complicated plot to follow, and its not particularly fast paced. You can be playing when your flight is called, pause the game, and when it’s time to continue, you are right back into it.

MotionX GPS $2.99
The iphone 3G comes with a built in GPS, and to maximize its use, you need GPS software. For $2.99, MotionX GPS is a no brainer. I don’t think there is any other software in the App Store that competes with this one. Keep in mind that there are no maps supplied with this program, so what you get is a ‘bare-bones’, non-mapping GPS, similar to the old Garmin Etrex, only with much shorter battery life ☹ I don’t leave mine on all the time, I use it selectively when I travel, in conjunction with paper maps or key in coordinates that I’ve researched and prepared. (Update 11 Mar: MotionX GPS Version 4.0 is now available and has the ability to stream live maps to the iPhone. Version 4.1 being launched by next week will have the ability to cache or store those maps onto the iPhone. That's going to be big!) 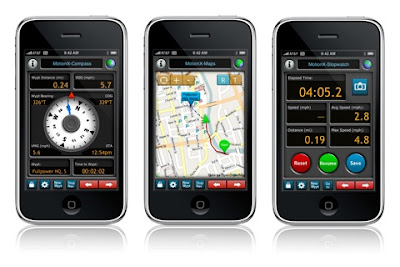 Hey! Here’s an idea: Wouldn’t it be cool if somebody could design a personal navigation tool using the iPhone 3G’s Accelerometers, so we could have some sort of Inertial Navigation system in conjunction with GPS. (Update 13 Mar: Fullpower, the developers of MotionX GPS, have hinted to me that something like this is in the works...)
Hmm…

AmbiScience PureSleep $0.99
I prefer this version to the Original Ambiscience Brain Power program (both $0.99 at the App Store). The program uses Brainwave Entrainment with Isochronic Tones (Whaa? Yeah, I had to Google it to find out what it is). I won’t pretend I understand the science behind it, but my career as an airline pilot and unending battle with perpetual jet lag has taught me the value of sleep, 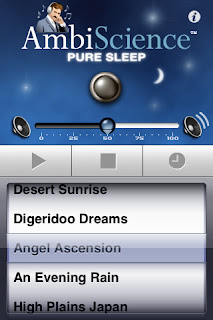 and anything that claims to help me sleep better is worth a try.

The program uses a combination of soothing ambient sounds, monotonous music, and a low frequency droning that is the brain entrainment component.

I’m hoping the developer will include more tracks, like waves, or waterfalls or the Soothing Stream track found in the original BP program. Also, I hope he finds a way to separate the music volume from the ambient sounds, just as the entrainment volume is a separate control. With different speaker/headphones combinations, especially at low volumes, the music can overpower the ambient sounds.

MobileStudio $1.99
This is one of many apps that let’s you transfer and view a whole bunch of document types on your iPhone, such as PDFs, Word Documents, spreadsheets and movies. However, this is the only app I've found that let's me edit certain documents, such as text (.TXT) documents. Note that the program may have stability issues with large file sizes as it has occasionally not been able to open large PDFs until I reset my iPhone.

Units (Free)
I wanted a converter like the one on the Dashboard of my Mac, and this is pretty close. It has a simple interface and converts currency, length, weight, etc. It works offline as well, remembering the last currency conversion rate. Best of all, its free. Enough said.