Alexandre Buisse.  Photo by Morten Kallesøe
Most of Alexandre’s thoughts run very true to mine, and so I contacted Alexandre to find out if he was still using the D90 as I had also heard that he was also considering a D700 or its replacement. To my surprise, he replied that he was currently testing out the Olympus E-P1, a camera that uses the new micro Four Thirds format. 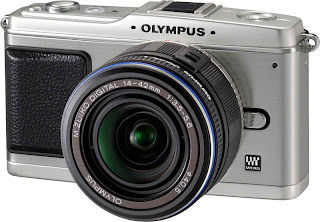 The retro styled Olympus E-P1
If you’ve not heard of it, Micro Four Thirds is a new camera system with interchangeable lenses developed by Olympus and Panasonic. The system does not provide space for a mirror and pentaprism, allowing smaller and lighter bodies to be designed.  The crop factor is 2X, so you'll need to multiply the focal length of the lens by two to get the 35mm or 'full-frame' equivalent.

At the time I first looked at it, there was only one body and few lenses, and it did not look like a serious alternative to my current DSLR system. Currently, however, there are 4 bodies (Panasonic G1, GH1 and GF1, and the Olympus E-P1) and some interesting new lenses such as the 20mm f/1.7 pancake and 7-14mm f/4 ultrawide-angle lens, and more are on the way! 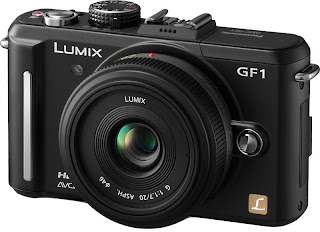 The Panasonic GF1 comes in other colors like red, white, silver, and wait for it... PINK!
Since I don’t have first hand experience with this system, I asked Alexandre for his thoughts:

In terms of image quality of his Nikon D90 vs. the Olympus E-P1, he says, “I would say that the images from the E-P1 with the 14-42 lens are 90% as good as those I could get from my D90 with a similar 18-55 kit lens.” The slight loss in quality is made up for in the lower weight and bulk of the camera system.

I was concerned about image noise, and Alexandre replied: “I rarely shoot high ISO, but the E-P1 seems to have a grain-like noise which I find very pleasant (see e.g.
http://www.aperturefirst.org/index.php?showimage=1065)."

I also asked if using the LCD to frame the subject instead of a viewfinder a problem, especially in bright sunlight or when wearing sunglasses? “It is,” he says, “and in the future I would consider the optional electronic viewfinder an essential accessory. When I skied down Vallee Blanche in Chamonix on a cloudless day, I had absolutely no idea what I was shooting at, and could only point the camera in the general direction of my subject, guesstimate the appropriate focal length and pray. Even in less extreme conditions, there is something about putting my eye into an optical viewfinder that is important in how I shoot, and one of the main reasons I still carry a DSLR.”

Our common concern is the battery life:
“I have only used the E-P1 on winter climbing weekend trips, and never shot more than 150 frames with it, so I can't really comment. The absence of detailed battery information is somewhat of an issue for me. Battery life
would be one of my main concerns for longer trips.”

In closing, Alexandre says "The E-P1 is a great camera capable of producing beautiful images, and it has found a nice spot in my photography practice: whenever I am going light and the focus of the day is on climbing more than on photography, both conditions often satisfied in winter and alpine climbing, then I'll take the E-P1. For everything else, I'll still go through the trouble of carrying the D90."

Thanks Alexandre, it's a very exciting time for the micro four thirds system and I'll be keeping a close watch on it :o)