I destroy MP3 players.  I don't even remember how many I've had over the years.  Training here is Singapore is very tough on electronics: high humidity and sweat  don't mix very well with electronics.  The average lifespan for my MP3 players tends to be about 6 months (the shortest about 2 weeks, and the longest about a year).  Given my history with destroying these gadgets, I tend to stay away from the more expensive players.  I've had the best luck with the Apple Shuffles, and I've owned the 1G, 2G, (skipped the 3G) and now the 4G. 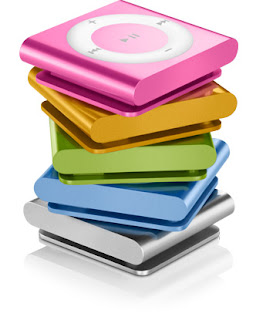 With the 4G, Apple brought back the buttons onto the player.  This is a good thing.  The reason I skipped the 3G is because without buttons, I had no choice but to use the Apple supplied 'click control' earphones, and I like to use my own headphones.

The 4G looks a little like the previous 2G.  The main difference (other than the shape) is an additional button on the top of the 4G shuffle.  This is the new 'VoiceOver' button, something taken from the 3G Shuffle.  Press and hold this button, and a voice reads out playlists that you can select.  This means you can create and drag playlists from iTunes and play them on the Shuffle.  I can have a fast playlist for my workout, and a slow playlist for stretching out after.  Nice :o)
How's it sound?  Nothing new here.  To my ears, it sounds just like the 2G, which could be good news or bad news, depending on what player you're coming from.  I've been spoiled.  When my 2G Shuffle died, I bought a Sandisk Sansa Clip+ MP3 player.  After 4 months, the plastic clip on the Sansa is already broken, but the player itself still works and still sounds great.  The Sansa Clip+ sounds more open, cleaner, more defined.  I'll miss the great sound from my Clip+, but given the hassle with syncing it to my Mac, I'll settle for the convenience of the 4G.

A big part of what helps keep my Shuffles alive longer than any other MP3 player is the build, and with the 4G, it is solid and tight, without any gaps or holes where moisture can easily penetrate.  The only hole is the 2.5mm headphone jack, and that's plugged up when you insert your earphones. 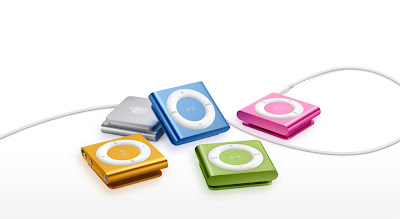 I've found that a good place to clip my Shuffles when I work out is on my baseball cap, roll up the excess earphone cable around the adjustment strap on the back of the cap, and just leave enough cable for the earphones to reach my ears.  Of course, you'll have to memorize where the buttons are, but that keeps it out of the way, and dry for the most part.

My iPod Shuffle has 2GB of memory and 15 hours of battery life.  It comes in grey, orange, green, blue and pink.  It costs US$49.99 from Apple, and is available here on Amazon:

Ok, so it's been about 3 months since I bought my 4G Shuffle.  During the second week, I managed to drop it from my dresser (about 4'/1m) and it landed on the corner where the headphones go.  I dented it such that the headphones couldn't go in.  It needed a small prying tool to widen the hole again.  No big deal, but it goes to show you how thin the material is.

Last week, my 4G died, and I sent it back to Apple.  I was concerned that it was corrosion, in which case the warranty is void.  It turns out that the battery was faulty, wouldn't charge properly and was giving me about 3 hours of play.  So they kindly changed my 4G Shuffle :o)