These are some images I shot in Tibet. There are more in my earlier posts: 7 Days in Tibet and parts 2 and 3. This top one of a woman carrying some vegetables back from the field was taken on the first day of the Ganden to Samye Trek, just outside a small village where we spent the night.

This shot of a nun was taken just outside Jokhang Monastery. I was behind her taking some shots when she heard me, turned around and smiled... which kind of surprised me, because Tibetans, in general, are pretty camera shy.

A young man, all dressed up on a motorcycle seems out of place as he rides by a group of monks. It seems to be a clash of cultures. The modern and the traditional. Personally, I think the motorbike looks out of place. 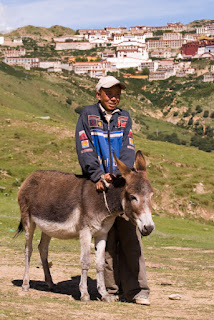 A boy and his donkey pose outside Ganden Monastery.

Yaks and horses waiting to take visitors unable or unwilling to make the climb up to Yumbu Lakhang Palace. The Palace is over 2000 years old and claims to be the first palace built in Tibet. It was one of those places that was not really on our list to visit, but our Lonely Planet guidebook said it was 'a must visit', so we went, and we were glad we did!

Top Adventures in Tibet- Tibet offers a lot of dangerous and adventurous routes to sports lover for fun and making trip thrilling. The popular sports for which holidayers can for are like Wildlife, Archery, Polo, Camel Safaris, Cycling, Mountaineering, Hiking and Camping, and of course trekking. These activities complete the desires of tourists and make the trip breathtaking as well as astonishing. Through these sports tourists also come close to the nature as it takes tourists to roam around the majestic surroundings of valleys, ranges, forests and hills.