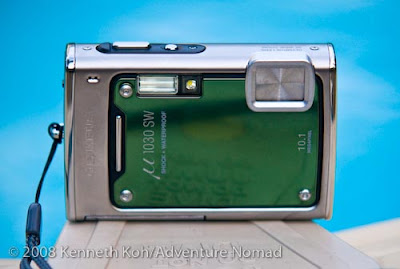 We have a lot of gear to bring and we are trying to keep the load manageable. My wife, Laura, and I will be using compacts during the race and sharing her Canon Rebel XT/350D DSLR for other times. Her aging Canon XT/350D is overdue for replacement and she’s waiting to either switch to the new Nikon D300s or wait for the upcoming Canon 60D or 7D or whatever it’s going to be called. 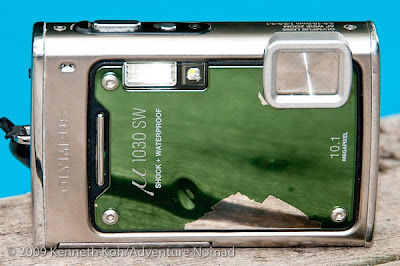 Laura’s compact is her trusty and well-used (abused?) Olympus 1030 SW. I’ve been lusting after the Panasonic Lumix DMC-LX3 for a while and now have the perfect excuse to get one. In a rugged, compact camera with a minimum wide-angle of 24mm, this is still the best choice for me. I’ll need the widest lens I can get to be able to work the angles I want while shooting from the saddle. The fact that it has a very fast (f/2.0-2.8) and sharp Leica lens is a nice bonus ;o) 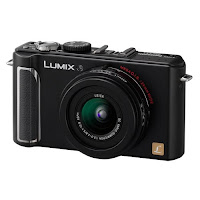 Shooting from a moving bike is tough. More so during a race. My strategy is to put the naked LX3 in a Bento Box

on the bike, whip it out when the opportunity arises, and shoot a variety of shots, and then replace it.

Update: A reader has informed me of similar product, the Topeak All-Weather Tribag. It is similar to the TNI Bento box but slightly bigger and heavier. It is padded and a has a rainfly cover. All in all, it is superior to the TNI Bento Box for carrying a camera or cell phone on the ride. I've just bought one. Thanks Ben :o)

Update: Sorry folks, this is a bad idea. I've gone to using the standard LX3 strap around my neck which allows me to drop the camera if I need both hands on the handlebar suddenly. The Tribag allows me to store the camera when I no longer require it.

The LX3 is such a popular camera that it is sold out everywhere and it may be a bit of a challenge for me to find one before the race :o(

The Topeak version of the Bento Box, with the rainfly, is a nifty little thing. Brought it through an hour of moderate downpour, with a Canon compact inside, and it remained dry.

Good luck for the race :-D

Nice! Thanks for the tip Ben. I'll check it out :o)

I had the same Olympus camera. Fullu abused with dent. The paint work is all gone and the plastic lens protection lost. The outer design is a failure but inside the camera it is very robust.

Picture quality not really that great. Thinking of getting another camera.

forgot to add. I did hv a problem cycling offroad in Taiwan and just dun know where to put my camera. Finally I got a fanny pack from Mountain Smith, did some modification. Went to Beach Road got the Auntie made a camera pouch to my spec. with velco flap and full velco strap loop for $10. Now my camera is secured on the side of my fanny pack with easy access. I will blog on my modification these few days or maybe next week in http://taiwancamping.blogspot.com under gears review