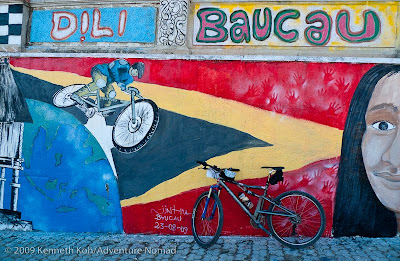 My Santa Cruz Superlight against a mural painted on a wall in Baucau, Day 2 Tour de Timor.

With the roads closed off to vehicular traffic, the riding was outstanding. Terrain varied from fast and smooth bitumen to rough and rutted doubletrack, although it was usually a combination of both, sometimes with sudden changes from one extreme to the other. 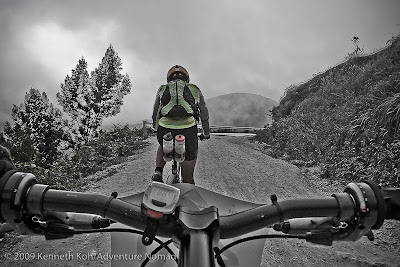 We started our ride along rugged coastal roads from the capital Dili to Baucau, then turned south through green fields of rice paddies and coffee plantations to Betano Beach, finally traveling west and north deep into the central highlands with wide, sweeping vistas before dropping back into Dili. The scenery was nothing short of spectacular, and my photos from my little Panasonic LX3 don’t do justice to the Timorese landscape. 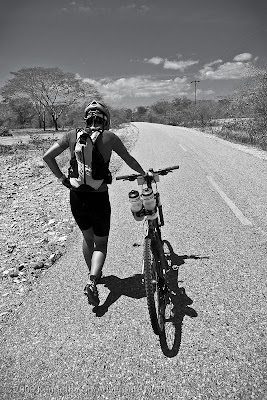 Laura reaches her limit near the end of Day 1, Tour de Timor.

It was the first time had I raced with my wife, and not knowing her limits, we pushed her a little too hard. When she dragged herself into Baucau at the end of the first day, the Race Doctor immediately rushed her to the Hospital. Needless to say, we ended that first day in last place among the Singapore teams. She recovered well though, we finished the race in good standing. It was a very positive experience for us both, and we are keen to race together again. 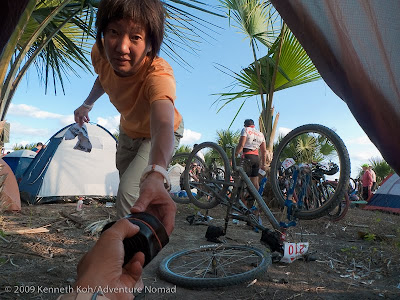 Laura handing me a tube in our tent to fix yet another flat tire on Betano Beach, Day3, Tour de Timor.

I do a couple of small criticisms that I hope the race organizers will look into. While the riding and race management was good, I could not help but feel that the infrastructure was a bit stretched. Accommodation, in Dili and for campsite space on the first night in Baucau, appeared insufficient for the 350+ participants, volunteers, media and officials. Meals, though sufficient in quantity, could have been better distributed, perhaps in individual packs, rather than as a buffet. Racers in the front of the buffet queue ended up hoarding food for fear of not getting enough, which is what happened to the racers at the back of the queue. Finally, the number of toilets provided could be improved, either by digging pit toilets, or by transporting portaloos.

Verdict:
A great event that can only get better!

Photos: All photos taken with a Panasonic LX3.

Looks good, can feel the ambience of the race back here in front of my com. The race ended?

This year's Tour de Timor is over, but there's always next year :o)

Amazing! Timor is a beautiful place.