I love new gear! Part of the fun of preparing for a trip is the chance to shop for new gear. In preparing for my upcoming trail run in Nepal, I’ve put up this small list. 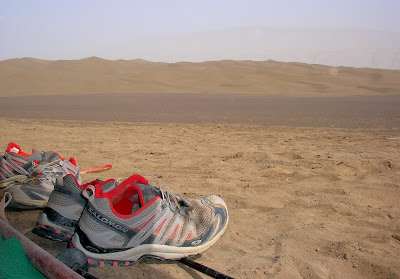 2007 Salomon XA Pro 3D XCR
Replaces: 2005 Salomon XA Pro 3D
As a former Salomon supported athlete, I’ve had about 10 pairs of the various versions of this shoe through the years, starting with the 2002 XA model to the current 2007 XA Pro 3D XCR. This is basically the goretex version of the shoe I used to run the Gobi Ultramarathon event in 2005. I’ve never been a big fan of Salomon’s lacing system. Although it has the advantage of being really fast to lace up, the little plastic lace lock is prone to failure, and it’s not easy to repair on the go.

In general, I’ve avoided Goretex lined shoes because of poorer ventilation. However, in the Gobi Desert race, a lot of the more experienced competitors who showed up in goretex shoes had fewer problems with blisters as the goretex helped keep the fine desert sand out of the shoes. Another caveat with goretex shoes is that if water goes in, it stays in. So if you are going in and out of water (which happens a lot in some races), you’ll need to stop to drain the shoes or run with heavy waterlogged shoes until they dry out. In Nepal, there is some piss and shit from beasts of burden like water buffalos and Yaks that gets mixed in water that washes down the trail, and I felt the goretex would come in useful in keeping some of that crap out of our shoes.

2007 The North Face Skareb 40 Backpack
Replaces: 2005 Gregory Advent Pro
There was nothing wrong with my Gregory pack, except I got it in the wrong size (I got a Large, I should be a Medium). I haven’t test out the new pack yet.

2007 The North Face Prophecy Jacket
Replaces: 2002 Marmot Precip Jacket
My Precip Jacket started leaking along the back of the shoulders (presumably from the rubbing of my backpack) and the neck after one season. The North Face Prophecy appears more durable and is only a half-ounce heavier. The trimmer ‘athletic’ cut also fits me better, and I look good in it, and that’s the real reason I bought it. Also not tested yet.

2007 Marmot Evolution Glove
Replaces: Kathmandu Yak wool, acrylic, polypro, or whatever gloves I can find
This is the first high tech pair of gloves I’ve bought not specifically for mountaineering. It seems to have good reviews, so I bought a pair to try out.

Buff
Pronounced 'boof', this tubular piece of microfiber is now a standard item in my pack. What’s it for? Beanie, scarf, handkerchief, pot-grabber, smog-mask…

Marmot Driclime Windshirt
Although the shirt tails and non-elastic cuffs look a bit dated, this lightweight (10 ozs) jacket is still the outdoor standard in terms out lightweight, versatile gear.

Montbell Alpine U.L. Down Hugger #5 Sleeping Bag
This sleeping bag has a weird name, but it uses very high quality 800 fill down, weighs only 1 lb and packs up insanely small. It’s rated to only 40F (+5C), but I can usually borrow a blanket from the teahouses I’ll be staying at. If I get nervous, I’ll buy their #3 Sleeping Bag which is rated to 30F and weighs about a half pound more.