The legset on my ‘big’ tripod weighs 3lbs (and the ballhead adds another pound). This is what many call a lightweight tripod, but it is heavy enough that it stays home (or near the car) most of the time. For adventures further afield, I look for a tripod with acceptable quality that weighs no more than 2lbs (including the ballhead) that can hold my Nikon D300 and 18-200mm lens.

The qualities important to me in a lightweight tripod are:

There’s no free lunch. The lighter a tripod is, the more sacrifices must be made in these three areas. If you want to go lightweight, you have to be able to accept these compromises.

Rigidity
To go lightweight, manufacturers build tripods with less material. This results in tiny, spindly legs. To keep these legs rigid, the heights of these tripods are kept short. You’ll need to get down on your knees to use these things. Also, the fewer the number of leg sections the better. Favor three leg sections over four.

Stability
A small, light tripod is inherently unstable. It is made worse if you try to use the center column to extend the height. A small tripod’s legs don’t spread out very far, and this small base of support coupled with a heavy load up high will make for a very tippy tripod. The key is not to use the center column on the lightweight rigs. To save even more weight, Galen Rowell suggested removing the center column and using a bolt and some washers to bolt the ballhead directly to the legset. Another tip to increase stability is to use a hook, centered under the ballhead, so that you can hang your camera bag or some other weight on it. Adding mass to the system will increase its stability as well as improve its vibration damping. The use of an L-bracket plate will also help keep the load centered.

Vibration Damping
A heavier tripod setup will dampen vibrations better than a light tripod because there is more mass to absorb those vibrations. Certain materials also absorb vibration better than others. Compare vibration-damping quality by touching the top of the tripod and tapping the legs to see how fast vibrations take to settle. Gitzo is really good at this, and this is why they command such a price premium.

Top Shelf: Gitzo 531 or 0531
Gitzo has to come to the top of the list. Despite the price premium, these tripods last many years, and will pay for themselves over time. To pair up with the Really Right Stuff BH-25 Ballhead, two Gitzo legsets come to mind: the GT531 and the GT0531. The Gitzo GT-531

, which is the latest generation in the tabletop series (like the GT530, G0027 and G001), is less than 2’ tall when extended without the center column. You’ll need to stoop and crouch to use it. It weighs just 410g and if you only use a tripod occasionally, this is the one to throw into your backpack. The Gitzo GT0531

is the latest in the weekend series (like the GT0530, G1027 and G01), comes up to waist height without extending the center column. You’ll need to either bend down or kneel to use it. It weighs 720g and is a good choice if you frequently use a tripod. 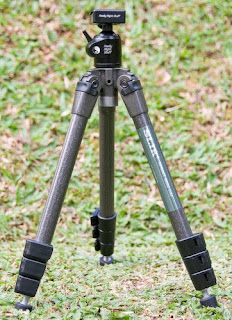 The Slik Sprint Mini with the center column removed an a RRS BH-25 Ballhead bolted directly onto the legset.

Cheap and Nasty: Slik Sprint Mini
The legs rattle and shake when you unlock the legset, and the 4 sectioned legs (I wish they made it with just 3 sections) slide out jerkily, but when locked down, the Slik Sprint Mini Tripod

seems sturdy enough. Without extending the center column, the tripod extends to about crotch height. It is taller than the GT531 but shorter than the GT0531. While the maximum load rating for the legset is 5lbs, the supplied ballhead (Slik SBH-100) will only hold 3.5lbs. I got rid of the supplied ballhead and center column, and bolted my RRS BH-25 ballhead directly to the legset. The whole rig weighs less than 0.75kg (1lb 10oz) and will benefit from the addition of a hook so that you can hang some weight on it. Cheap and nasty? Perhaps… But I’ll still be using mine until I can afford to buy one of the Gitzos.

A question sent by email:

"Hi Kenneth,
I would like to ask you for an advice.
I am considering buying Slik Sprint Mini Tripod which you suggest as a good
choice for travel photography.
I will buy it via e-bay.com auction. The ball head of your choice is rather
expensive for me, so I will opt for a cheeper Manfrotto 484 RC2 Mini Ball,
which is slightly heavier then RRS BH-25, but it features quick release,
which is important. But I wonder how to bolt a ball head directly to tripod,
when a central column is removed. Shall I by a special bolt?"

I'm not sure if the Manfrotto ballhead is strong enough. Be sure to test it out with your gear. You will need to go to a hardware store and buy a 1/4 inch bolt, and some washers that will fit inside the tripod body so that you can fit the bolt. It is a bit of luck and trial and error to find the right fit. Once you get the tripod, you may find that you like the center column and may decide to keep it on anyway. Keep in mind that I am not recommending the Slik Sprint Mini. It is a very light and not very stable option for when you absolutely cannot carry the extra weight of a heavier tripod.

Thanks ever so much, very useful article. If you do not mind, please visit my article related to travel to Pandeglang district in Banten, Indonesia at Kenali dan Kunjungi Objek Wisata di Pandeglang

Today is my lucky day :)
Apple is giving review copies of iPad to 100 lucky person. Go to http://bit.ly/d9QOON and apply for it.

I also enjoy this post with your adventurous travel. Thanks fr sharing.
Telescoping Tripod Worklight