Note about gear: Don’t sweat the small stuff. Don’t second guess yourself and undermine your confidence at this stage of the game. Decisions about what kind of tire to use may seem really important now, but once the race starts, it won’t. It’s more important to bring back-ups: a spare tire in case what you brought doesn’t work, or you shred one; extra water bottles or a hydration bladder in case of loss or failure; more riding clothes in case it is colder than you think or in case they don’t dry in time; extra food; etc. 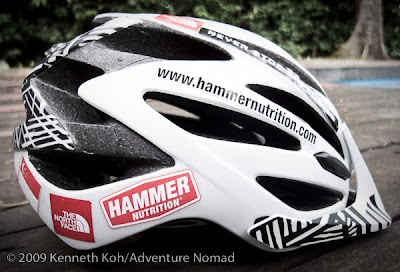 Tires
My ‘best guess’ is to go with semi-slicks. The touring/messenger slicks are a good choice for puncture resistance, but they are heavy and may not necessarily roll faster on poor roads.

We are going with a Kenda Klimax Lite 1.95 (345g) up front and a Panaracer Speedblaster Race Lite 1.75 (360g) on the rear. (For this race, I would have preferred the Kenda Kozmik Lite II 1.75 (390g) for the rear, but those aren’t available here in Singapore). The Klimax Lites have surprisingly traction with low rolling resistance, but are quite puncture prone. We put the Speedblasters on the rear for (hopefully) better puncture resistance. Both tires roll very fast with hard inflation, but the key with the Speedblasters is not to overinflate them, otherwise the big side knobs won’t bite. The Klimax Lites don’t have this problem as they get traction from the ‘V’ shaped knobs down the center. Pump ‘em up hard and enjoy! 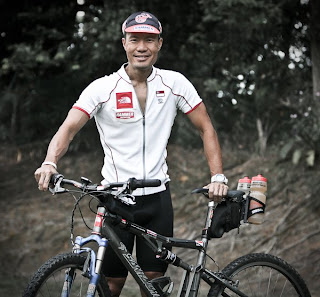 The bike and me. Photo by Laura Liong.

Hydration and Nutrition
I’m bringing 3 bottles on the bike: 1 downtube bottle filled with Hammer Perpetuem/Endurolytes mix, and 2 filled with water in a ‘triathlon’ style bottle holder behind the saddle. I’ll also be bringing an extra water bottle AND a hydration bladder, just in case. I’ve had a few questions about the behind the saddle bottle holder and my suggestion, as usual is, if you haven’t tried it in training, don’t race with it. They do look cool, but the bottle holder introduces some issues you may not have thought of:

1. It may restrict shifting your weight to the rear on downhills;
2. The bottles are prone to popping out on bumps and we’ve had to rig up some shockcord to hold them in.
3. It may require more coordination handling the water bottles than drawing water from the mouthpiece of a bladder.

Hey Kenneth , Do share your experience with the readers on the excitement happening over as Timor when you are back ya, (curious to know about the terrain as stated in the Straits Times) :) Best of luck and Have Fun. I believe you guys will ride hard. :D

I'll be posting more stuff about the race in the coming days.

Thanks for reading,
Ken