During my career in the airline, I must have been to Beijing over 30 times. I’ll admit that other than the first couple of trips, I’ve spent most of my layovers within a few kilometers of the hotel. Felicia Soh, an employee of The Ascott Hotel, suggested an itinerary for our two days in the Chinese capital that would turn out to be some of the highlights of the trip. 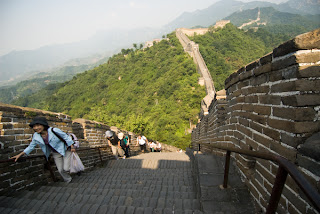 The arranged minibus picks us up from the lobby and sends us to The Wall at Mutianyu. We arrive just after 0900, early enough that it’s not too crowded. We decide to walk up. It took us about 30mins, but it’s not a spectacular walk up and I would suggest you shell out the money for the cable car up. How much time you spend up there is up to you, but when you are done, you can either walk, cable car, or take the luge back down. We took the luge, a high-speed fun ride back to the parking lot. If you are short on time, you could visit the Great Wall at Badaling, which is closer to the city. Brace yourself: With the luge, cable cars and shops lining the way up, the visit tends to be pretty commercial. But the wall itself is spectacular and well worth the visit. 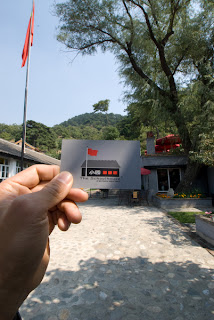 The Schoolhouse at Mutianyu is a restored former school, which has been restored and converted into a funky restaurant and a glass-works and studio by the resent owners. The chef, Mr. Singh, a Sikh from Canada, who has settled down in China, is representative of the type of atmosphere and food you can expect to find there. Cosmopolitan. And the service is excellent.
No.12 Mutianyu Village; Tel: 6162 65067

1930 – Dinner at Li Qun
I must admit that during my career in the airline, other than the first couple of trips, I’ve spent most of my layovers within a 1 km radius of the hotel.

So when, Felicia Soh, an employee of The Ascott Hotel, suggested we have Peking Duck at this out-of-the –way restaurant, I was skeptical. Li Qun Roast Duck Restaurant serves up the famous Peking duck and is located in an old slum. The taxi will not enter the slum and will drop you off on the main road, where you either have to find your way in, or succumb to the touts and pay 10 Yuan for a 2min rickshaw ride in. It turns out this restaurant is well worth the effort to go there. Reservations are required.