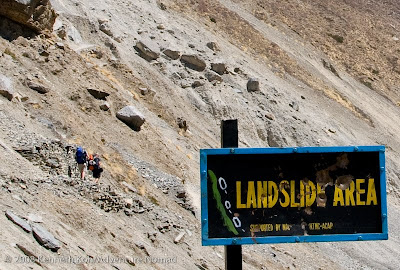 The Himalaya is a young mountain range and landslides are common. The village of Bagarchap, where a landslide wiped out a number of lodges and killed 11 people in 1995, has never recovered. Most of the wealthier lodges have relocated to nearby Danaqu.

In the photo above, taken just below Thorung Phedi, we were caught in a mini landslide. The rock wall above us, weakened by expanding ice in the fractures from the warm sun, lets loose a volley of small rocks. We take cover for about 10 minutes behind the safety of a rib of rock, but the couple in the top photo, about 50 meters in front of us, were not so lucky, and were pelted by small rocks bouncing down the slope. Fortunately, the rocks were small and slow moving, and other than some small cuts and bruises, no one was injured.

We end the day at Thorung Phedi, ate, went to bed early and were poised to launch ourselves over the high pass of Thorung La early the next morning.