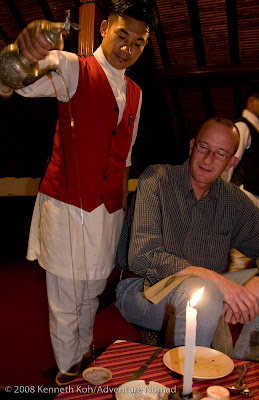 April 16: Kathmandu - Khudi
I first trekked the Annapurna Circuit 20 years ago, in the spring of 1988. I’ve been back since then, doing different treks in Nepal, but the Circuit remains, at least in my mind, the iconic Nepal trek. I wanted to do this trek with my wife to celebrate our 10th wedding anniversary, but problems with the Maoists over the past decade delayed our plans to do it until now.

Obtaining a trekking permit was a breeze. We were in and out in less than an hour, and NRs 2300 poorer each (NRs 2000 for the trekking permit and NRs 300 for a TIMS trekkers registration fee). While we were there, we also booked ourselves into one of the minibuses that run from Kathmandu to Besi Sahar. 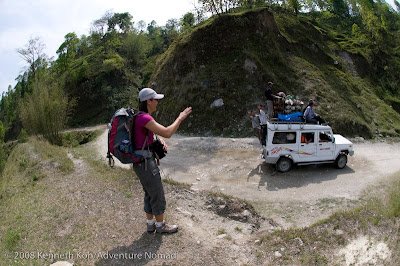 20 years ago, the road to Besi Sahar was paved only to Dumre. I took a public bus (which broke down 3 times) to Dumre. At Dumre, I needed to find further transport to complete my journey to Besi Sahar. This took a nightmarish 15 hours and I only arrived Besi Sahar late at night.

This year, our bus journey took just 5 1/2 hours. In fact, if we wanted, we catch a jeep ride to Bhulbule, saving 3 hours of trekking. Road improvements were going to be a two edged sword, as we would find out over the coming days.

We took a short walk from Besi Sahar and ended our day at the small village of Khudi.